Go back to Bliss Press Parts

How to find the parts you need

② Once you know which parts you want to order, request a parts quote.

Request a parts quote
Questions? Chat with us 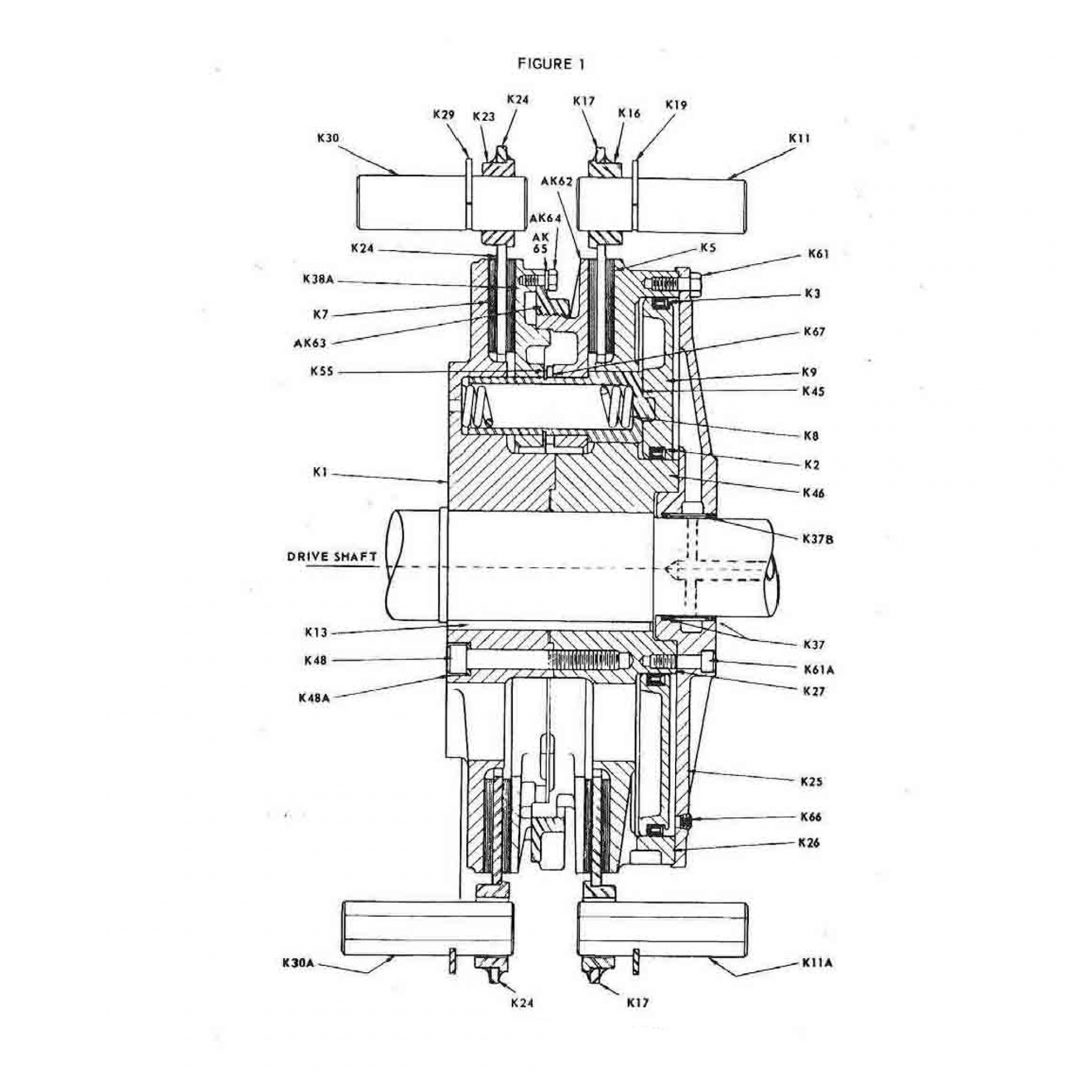 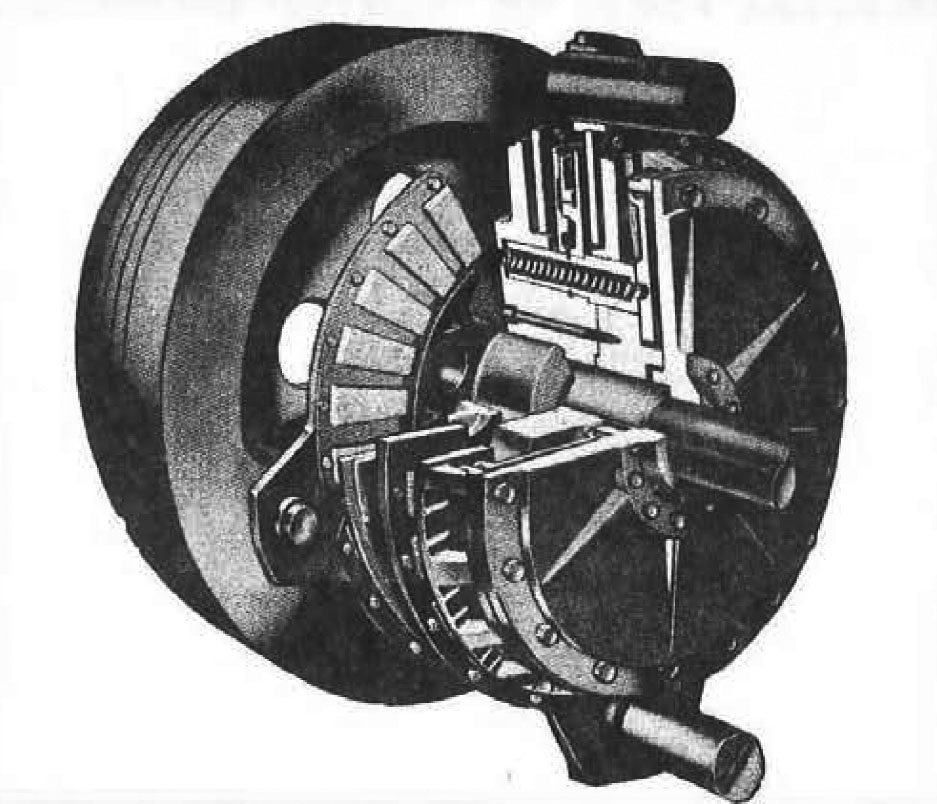 The Bliss ”AK” clutch is a combination pneumatic friction clutch and spring-loaded disc brake. Compressed air is used to engage the clutch. When the air pressure is released, the springs set the brake.

The clutch has an adjustable feature to insure instant engagements and full energy transfer after normal wear has taken place on the linings.

The clutch and brake friction discs are separated by the “driving assembly” which consists of the clutch driving disc (K-38A}, the brake driving disc (AK-62,), and the adjusting ring (AK-63) with screws (AK -64). This assembly rotates with the driveshaft, the clutch body (K-1), and the air cylinder (K -46). The “driving assembly” is moved by air pressure to engage the clutch, and by spring pressure to set the brake.

To engage the clutch, compressed air is admitted to the air cylinder (K-46) through the driveshaft and the cylinder head (K-25). The air pressure moves the piston (K-9) which compresses springs (K -8) and moves the driving discs (K-38A) away from the brake disc toward the clutch disc. This grips the rotating friction disc (K-24) between the driving disc (K-38A} and the clutch body (K-1), thus creating the friction for starting the driveshaft. rotating and transferring the flywheel energy to the driveshaft. Air pressure must then be maintained in the line to the air cylinder (K-46) during the required operation of the press.

When air pressure is released, the brake springs move the driving disc away from the clutch disc and toward the brake disc. This grips the motion less brake disc, disengaging the clutch and creating the friction necessary to stop the crankshaft. 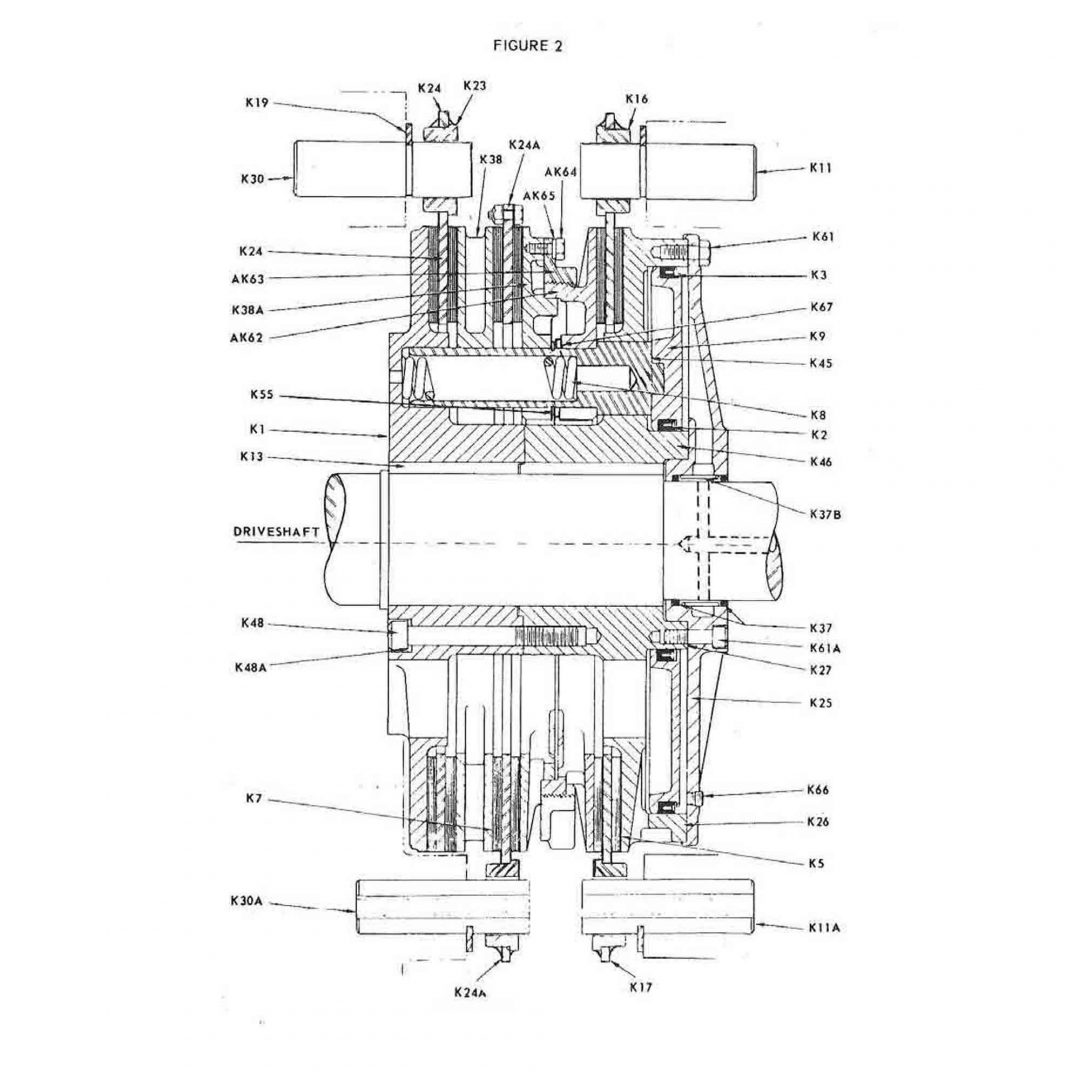 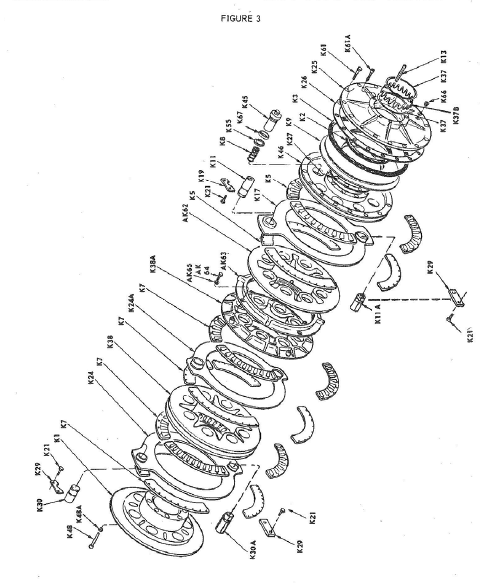 When ordering spare parts or replacements, give the PRESS NUMBER, the SERIAL NUMBER, the NUMBER and NAME of the part wanted, and the PAGE NUMBER of this service manual.
WARNING: If it is necessary to disassemble clutch, remove two (K-4B) clutch body screws and add two longer srews or studs. This is to prevent cylinder (K-46) from coming off shaft as spring (K-8) has tendency to separate cylinder and clutch body. Flywheel Bearings must be greased approximately once every three months. One shot or one stroke of grease gun is sufficient. Use American Oil Rykon Grease #EP or equivalent. 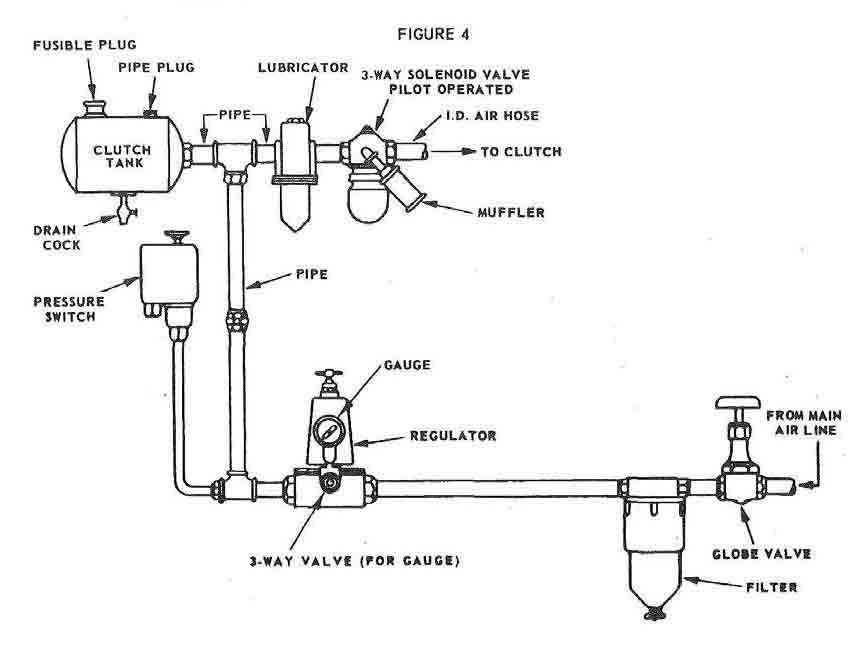 Air service must be provided lo operate the clutch. A single air line inlet is usually provided on the press, to which the shop air line must be connected. Piping is arranged so that all compressed air passes through a common filter or separator. Branch lines leave the outle t side ol the lifter to the clutch and other air devices, when furnished. An air pressure regulator in each branch line maintains proper operating pressure for these devices. See Figure 3.

An air line lubricator is provided in the branch line to the clutch, and is installed between the clutch pressure regulator and clutch operating valve. The lubricator should be adjusted to a line mist on every clutch engagement. Use a high grade straight mineral lubricating oil with a viscosity of 145-165 SSU@ 100° F. SAE No. 1O.

An air tank is required in the clutch line to reduce the pressure drop at each clutch engagement.

The air line filter bowl must be drained regularly for effective performance. There is a “drain cock” at lower end of bowl for this purpose. Never permit moisture to fill bowl above baffle or up to filter element, otherwise, collected moisture and emulsion may be carried into the air line.

Note that the air tanks are provided with drain cocks to remove accumulated moisture.

An air swivel and hose provide a flexible connection between the clutch operating valve and the drive shaft. 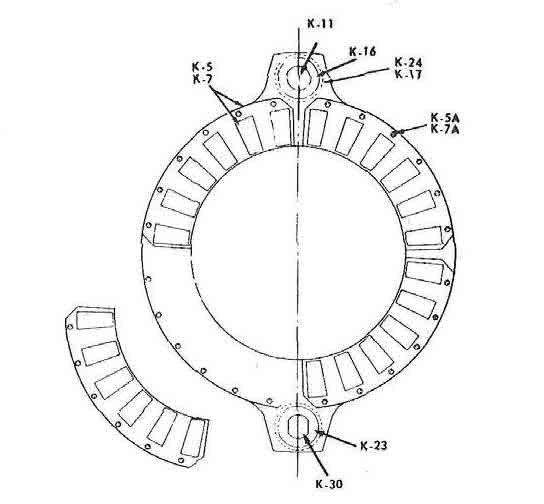 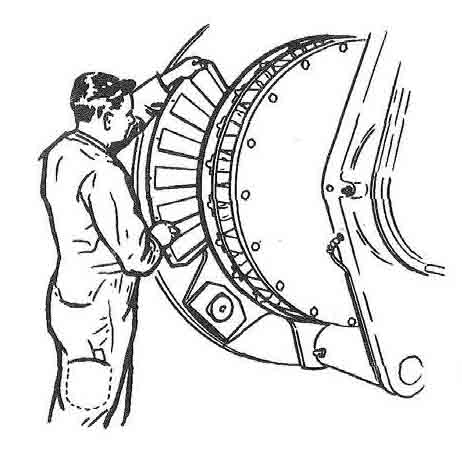 CLUTCH LINING REPLACEMENT
The replacement of the clutch and brake linings can be made without disma ntling the clutch. The clutch friction block assemblies are made in quadrants requiring four per friction face or eight for each friction disc . See Figure 5.

Figure 6 (left) –This illustration indicates the ease with which the clutch friction plates can be replaced. This is accomplished without disassembling the clutch and with a minimum of down time.

This is the same as mentioned above for the clutch except that air pressure must first be applied to release the brake disc. Be sure stroke is down when changing linings. 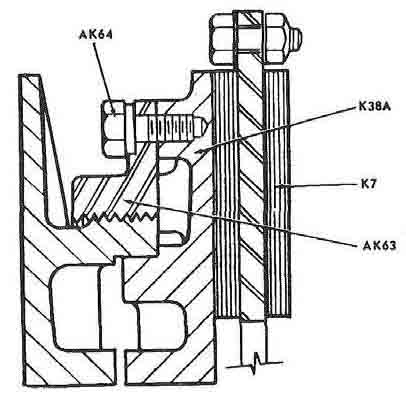 The clutch can easily be adjusted to take up any clearance between the driving disc (K-38A) and linings (K-7) which may have resulted from lining wear. Correct adjustment will insure instant clutch engagement, full energy transfer from flywheel to driveshaft, and will minimize air consumption.

Adjustment should be made when the amount of clearance between the driving disc (K-38A) and linings (K-7) exceed 3/16 inch. First remove the four cap screws (AK-64) then lap driving disc (K·38A) until it is free from (AK-63) and tum adjusting ring (AK-63) until there is no clearance between clutch driving disc (K·38A) and linings (K-7). Then back off adjusting ring (AK-63) 1/2 to 3/4 turn. Turn back additional amount if necessary to line up cap screw holes and replace cap screws (AK-64).

IMPORTANT: These clutches must be adjusted regularly to prevent clutch slipping and creating excess heat.

General Assembly of Swivel and Hose 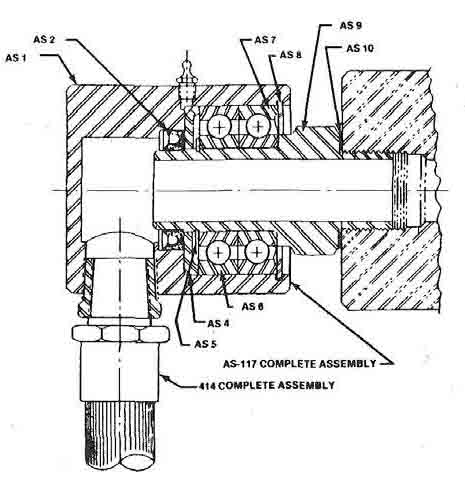 Why use genuine Bliss parts?

Purchase press parts with confidence from BCN Technical Services. We guarantee at the time of delivery, the goods will be free from defects in materials and workmanship. We will perform services in a prompt, professional and workmanlike manner. View our Goods and Services Warranty for details.

Replacement parts are manufactured to original OEM specifications from record sets maintained by serial number, so there’s no guessing or wondering if a part will fit. We have original drawings, manufacturing expertise, and the experience of a team of engineers who know your press inside and out.

BCN Technical Services has an extensive inventory of the most requested OEM replacement parts in stock at our facility in Hastings, MI. Over 14,000 unique spare parts for presses are kept on hand. Our experienced staff is dedicated to quickly providing that critical part, which allows you to avoid delayed repairs, lost productivity and lost revenue.